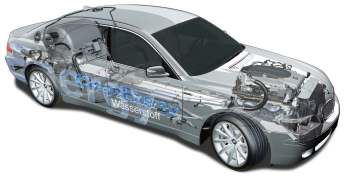 Discussions about future transportation, and the way we are going to power our vehicles, seem to be ubiquitous these days. In these discussions, the fuel cell and hydrogen have a major impact.

The BMW Hydrogen 7 proves that even with existing engine technology and management, it is possible to power a car with a commercial engine and hydrogen. BMW used its 7 Series 12-cylinder car as the base for the new hydrogen car.

In this project, SWEP has taken an active part in designing the future of automotive transportation. The company's B5 BPHE is an integral part of the new engine management.

The main challenge in BMW's hydrogen solution was the storage and transport of the hydrogen, because its specific capacity is lower than that of existing gasoline.

Björn Felgenhauer, Manager Application Management and Technology Manager at SWEP in Germany, says there are two current and different approaches: high-pressure gas (700 bar) or liquid hydrogen. BMW has decided to use liquid hydrogen (-253°C), which is kept in a vacuum-isolated tank. To be able to use the liquid hydrogen, it has to be evaporated and heated to temperatures above the freezing point in order to prevent the valves and sensors from malfunctioning.

“To achieve this, our heat exchanger has an important role in the engine management and it is a key factor for the success of the project,” Felgenhauer says.

“The safety demand is also very high. As this hydrogen car is so new to the automotive business, many new certifications were needed, such as the approval for material working at the very low temperature of -253°C. In addition, we also had to check if our material was suitable for hydrogen.”
Eventually, BMW decided to use SWEP's B5 model. It was also approved for the automotive business in the IMDS (International Materials Data System) database, so that the BPHE unit can be used worldwide by car manufacturers.

“The automotive industry's specific requirements for every component used demanded that BMW search for partners with distinguished competence,” Felgenhauer explains. “A BMW partner must also have the ability to make high-quality products on the industrial scale required for automotive serial standard. Since the heat exchanger is the link between the water system and the hydrogen, it had to be 100% reliable.” 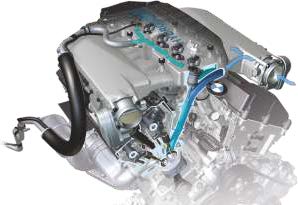 The BMW Hydrogen 7 is built in a limited series and is to be driven by selected users to start with. The Hydrogen 7 is based on BMW's 7 Series model and is equipped with an internal combustion engine capable of running on either hydrogen or gasoline. With the BMW Hydrogen 7, the BMW Group is laying down a marker for sustainable mobility. According to BMW, this car will play a pioneering role in driving forward hydrogen technologies.
Hydrogen technology dramatically reduces emissions generated by personal transport and, in particular, minimizes the emission of CO2 . Running in the hydrogen mode, the BMW Hydrogen 7 essentially emits nothing but water vapor.
With all the comforts and amenities of a non-hydrogen BMW 7 Series, the BMW Hydrogen 7 is powered by a 191 kW twelve-cylinder engine that accelerates from 0–100 km/h in 9.5 seconds. Top speed is limited electronically to 230 km/h.

SWEP's B5 solution for BMW

SWEP started with a B5 back-to-back solution where the liquid hydrogen is evaporated in the first pass and overheated in the second plate package. The necessary heat is recovered from the cooling cycle from the engine.
“The separation of the evaporator and the overheater was the solution for the problem, because the volume increase from the liquid to the gaseous stage makes it impossible to achieve the required capacity in an ordinary plate heat exchanger, taking into account the space and weight restrictions for automotive use,” says Björn Felgenhauer, Technical Sales Manager at SWEP. “By using the back-to-back concept, we were able to fulfill the requirements with only 26 plates (1.9 kg) to run a 200 kW engine.”

The IMDS is the automotive industry material data system. It has been a joint development from the start between Audi, BMW, DaimlerChrysler, Ford, Opel, Porsche, VW and Volvo. Additional manufacturers have also joined the community and talks are being held with others regarding their participation in IMDS. In the IMDS, all materials used for car manufacture are archived and maintained. In this way, it is possible to meet the obligationsplaced on car manufacturers, and thus on their suppliers, by national and international standards, laws and regulations. 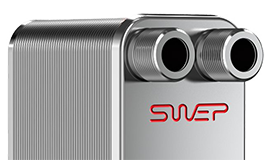 The B5 enables efficient heat exchange in applications with small flows and extreme demands for compactness. Easy to install and use, the product is small yet versatile, which makes it a good choice for small oil or water coolers.