​In several types of automated industries, compressed air is used for various purposes such as spray painting or pneumatic tools (compressed air equipment). A common problem in compressed air systems is the condensation of humidity. It appears along distribution pipes, blocking filters and machinery, and causes malfunction of the system. The water can cause corrosion and considerable damage to the equipment using the air. The condensation is due to the water vapor in the compressed air. This vapor is cooled along the pipes, and thus transformed to water droplets.

To avoid water condensation in a pneumatic system, an air dryer can be installed in the system (see Figure 10.21). The basic function of the air dryer is to remove moisture from the air by cooling it with a refrigerant. Thus, the water vapor is condensed, and the air can be compressed. The result is dry compressed air, which can be used in compressed air equipment without causing any damage.

In a pneumatic system, the air leaving the compressor (point 1 in Figure 10.21) contains a significant amount of water. In the after-cooler (2), up to 70% of the moisture can be removed. After the separator (3), the compressed air is still saturated with moisture. The air is then stored in a receiver (4), which can be installed before or after the air dryer (6). The goal of the air dryer is to eliminate the remaining 30% of the moisture.

The system design with the air dryer after the receiver, as shown in Figure 10.21, is recommended when the compressor operates intermittently and the air demand is not more than the maximum compressor capacity. If the air demand can exceed the maximum capacity of the compressor, the installation of the air dryer before the receiver is recommended. The cooling conditions in a pneumatic system can be demonstrated by monitoring the pressure, temperature and humidity during the compressing and cooling stages, as shown in Figure 10.22.

SWEP air dryers are an ingenious version of the compact brazed heat exchanger. They transform the moist warm air from an ordinary air compressor to dry air at ambient temperature. Figure 10.23 explains the flow pattern, and shows the port locations.

The warm, moist air from the compressor (point A in Figure 10.23) is pre-cooled in an air-to-air heat exchanger (the air from the compressor being cooled by the leaving dry air). Then the moist air enters the second chamber of the BPHE where it is further cooled by the refrigerant from the refrigerant compression cycle (E-F). The condensate is then separated from the air stream at point (B). The cold dry air then makes a second pass through the air-to-air heat exchanger to be reheated before leaving the dryer.

The B12 has been specifically developed as a heat exchanger for air dryers. The majority of the conventional BPHE models create relatively high pressure-drop in air dryer applications. If the pressure drop in the heat exchanger is too high, it will reduce the overall performance of the pneumatic system, i.e. the system will not be able to deliver the required pressure to the pneumatic tools. The B12, however, has a low pressuredrop.

It can handle asymmetrical flows and can be used as a combined air-to-air and refrigerant-to-air heat exchanger.

Figure 10.21 A pneumatic system with an air dryer. The components are in order a compressor, an after-cooler, a separator, a receiver, a bypass and an air dryer. 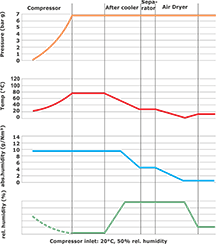 Figure 10.22 Pressure, temperature and humidity changes along a pneumatic system.

Figure 10.23 A SWEP air dryer. The warm, moist air from the compressor (A) first enters the air-to-air part of the dryer, where it is pre-cooled by the leaving dry air. After this passage, the moist air enters the second chamber where a refrigeration circuit (E-F) evaporates, thus reducing the air temperature dramatically. The corrugated BPHE plates aggregate the water mist into droplets that are separated outside the unit at point (B). The cold dry air finally re-enters the air-to-air part of the heat exchanger, where it is heated to ambient temperature by the entering moist, hot air.