Operating at very low evaporation temperatures (e.g. when providing cooling for a deep-freezer and still using ambient air or similar as a heat sink for the condenser) often requires special system solutions.

Intermediate gas cooling is often used between the two compressor steps. By cooling the refrigerant vapor after the first compressor, the discharge gas leaving the high-stage compressor can be kept at an acceptable temperature level. The intermediate cooling also increases the compressor efficiency, which reduces the compressor power consumption.

A two-stage system is a refrigeration system working with a two-stage compression and mostly also with a two-stage expansion. A schematic system layout and the corresponding process in a log P/h diagram are shown in Figure 10.16. Flash gas is separated from liquid refrigerant in an intermediate receiver between the two expansion valves. The high-stage compressor will then remove the flash gas, as shown in Figure 10.16. The removal of the gas between the expansion stages reduces the quality of the refrigerant vapor that enters the evaporator from the state 'j' (which would be the vapor quality if only one expansion valve were used) to the state 'i', as shown in the log P/h diagram of Figure 10.16.

Due to a lower quality entering vapor, each mass unit of refrigerant passing through the evaporator will be able to absorb more heat, reducing the required refrigerant mass flow rate for a given cooling capacity. This in turn reduces the required low-stage compressor size. Because of the enhanced heat transfer coefficient in the evaporator, the heat transfer area needed is also reduced.

An intercooler system uses an intermediate evaporation step, similar to the economizer system, to cool the discharge gas from the first compressor step. The two-stage intercooler system is shown together with a corresponding log P/h diagram in Figure 10.17.

The refrigerant liquid leaving the condenser (state 'a' in Figure 10.17) is split into two streams. The smaller part of the liquid (m2) is fed through an intermediate expansion valve ('a' to 'b'), and then allowed to evaporate on one side of the BPHE intercooler ('b' to 'c'). The main flow (m1) is sub-cooled by leading it through the other side of the BPHE intercooler ('a' to 'd'). The sub-cooled refrigerant liquid leaving the intercooler is fed through the main expansion valve ('d' to 'e') and then through the main evaporator ('e' to 'f'). The sub-cooling decreases the inlet vapor quality, which reduces the refrigerant mass flow rate through the evaporator and the required low-stage compressor size for a given cooling capacity. The intermediate refrigerant stream (m2) is not completely vaporized when leaving the intercooler (state 'c'). The remaining liquid is evaporated when it is mixed with the hot discharge gas from the low-stage compressor.

This results in efficient gas cooling ('g' to 'h'). The discharge gas from the high stage compressor can be kept at an acceptable temperature (state 'i'), and the compressor efficiency is increased.

Multi-stage refrigeration cycles can also achieve very low temperatures efficiently, but there are some major disadvantages compared with the cascade cycle. In multi-stage refrigeration, the same refrigerant must work at the highest and the lowest pressure levels. The selection of refrigerant to avoid excessively large pressures in the ambient condenser, and evaporation pressures below one atmosphere in the cold evaporator, can be difficult. Vacuum should always be avoided, because this increases the risk of air and moisture leaking into the system, leading to reduced system performance and increased wear on components. Because the refrigerant oil has a higher solubility in the refrigerant at higher temperatures, a multi-stage system also has a higher risk of uneven oil distribution, giving lubrication problems in the low-stage compressor.

By contrast, refrigerant selection and oil distribution for a cascade system can be dealt with separately for each circuit. It is important to note that the cascade heat exchanger will be exposed to temperature and pressure fluctuations. In the cascade unit, the evaporating side typically operates at -10 to -20°C. The discharge gas from the low-temperature compressor may very well be 80°C or higher. To avoid the risk of thermal fatigue inside the cascade unit due to the very high temperature differences, the installation of a desuperheater (5) is recommended before the inlet on the condensing side, i.e. in the "cold" circuit. 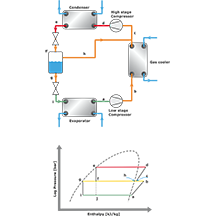 Figure 10.16 Schematic layout of a two-stage low-temperature refrigeration system (right) with a log P/h diagram (above). 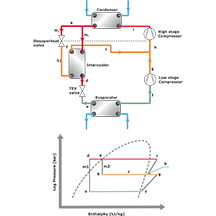 Figure 10.17 Schematic layout of an intercooler system (right) with a log P/h diagram (above). 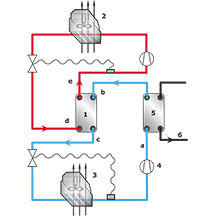