A refrigeration system contains a minimum of four key components: compressor, condenser, expansion valve and evaporator. However, in practice the systems are much more complicated. A number of components make the system more efficient, reliable or controllable, as shown in Figure 2.12. Many of th​ese components must be selected with care, because they can have a negative influence on the system if they are incorrectly selected or mounted. The most important components are described below. Information about problems that could affect the refrigeration process and the performance of heat exchangers and expansion valves has been italicized.

All refrigeration compressors except centrifugal compressors contain oil, which lubricates the compressor and forms seals between the moving parts during the compression. The oil is important to achieve high efficiency in the compressor, but it affects the heat transfer in the system negatively.

There will always be some oil in the discharge gas from the compressor. Screw compressors usually have much more oil carry-over than other types.

To minimize the amount of oil that must be transported around the system, an oil separator can be introduced (see Figure 2.13). It is important to remember that there is no such thing as a 100% efficient oil separator, which means that all systems must be dimensioned to ensure adequate oil transport. The oil separator will only delay the failure of a system without proper oil transport. Oil transport can often be a problem during part-load operation when the velocities are low. This can create problems during continuous operation at part load.

The oil separator is mounted in the high-pressure pipe between the compressor and the condenser. When the high-pressure gas enters the oil separator, the gas velocity decreases. This causes the oil that is transported by the refrigerant gas to be captured by the metallic filter in the inlet. The oil then forms droplets, which fall down to the bottom of the oil separator. When the oil level is high enough, a float-valve is opened that allows the high pressure to force the oil back to the compressor. As a final precaution against oil being swept into the system, there is a strainer in the outlet that also captures oil.

At high evaporation temperatures, such as in air conditioning systems, oil separators are common only in screw compressor systems. This is because the small amount of oil from scroll compressors and reciprocating compressors will be carried around the system without any significant effect. At lower temperatures, the viscosity of the oil increases greatly, and consequently its impact on the heat transfer increases. The problem of oil carry-over increases with higher viscosity oils and lower density gases.

Where an evaporative condenser, an air-cooled condenser, or a tubewithin-a-tube condenser without sub-cooling is employed, a receiver is necessary to collect the condensed refrigerant used by the system. The receiver also stores the entire charge of the refrigerant during the period when the system is pumped down. The receiver is usually just a small steel tank with appropriate shut-off and relief valves (see Figure 2.14).

The receiver is placed in the liquid line (i.e. the part of the refrigeration cycle where the refrigerant is in the liquid phase) between the condenser and the filter (cf. Figure 2.12). It should be filled partly with liquid and partly with vapor in all operating conditions. A receiver will be needed only in systems where the evaporator volume is large compared with the condenser volume and a wide operation range is desired or pump-down operation is used. The receiver can also be used as a service vessel to hold the charge while work is performed on other parts of the system. Unlike most systems, those using air-to-refrigerant evaporators operating under varying conditions often require a receiver.

Although there are advantages in having a receiver, in many systems there are strong reasons to avoid one. Because the receiver contains both gas and liquid, little or no sub-cooling can be achieved at the outlet, which is an important difference from a system without a receiver. With little or no sub-cooling, all pressure drops or heat transfer to the liquid line will cause flash gas, which means the expansion valve has no opportunity to function correctly. To achieve substantial sub-cooling, a separate sub-cooler is required after the receiver.

Moisture, water vapor or foreign matter may cause problems in any refrigeration system. Moisture may freeze in the orifice of the expansion valve, cause corrosion of metal parts and wet the motor windings of a semihermetic compressor. Eventually, this can result in motor burnout and oil sludge. Foreign matter, on the other hand, may contaminate the compressor oil and become lodged in valve parts, rendering the valve inoperative. Various types of devices are used to remove water vapor and foreign matter from the refrigerant stream, some of which are described below.

Liquid line filter driers are positioned in the liquid line to protect the expansion valve from particle contamination and to absorb potential humidity in the refrigerant. Different desiccant materials are available to suit the various types of refrigerants.

This type of filter drier should always be installed in the system. If not, the expansion valve could become blocked by particles or by ice formation due to humidity. Damage to the compressor could also follow. The combination of humidity and high discharge gas temperatures will accelerate decomposition of the oil. This also increases the risk of compressor failure.

If a filter in the liquid line becomes blocked, there will be a pressure drop causing the liquid refrigerant to boil and create flash gas, which will disrupt the operation of the expansion valve.

However, they are not always installed. After burnout, when the electric motor in a hermetic or semi-hermetic compressor has failed, they are often installed temporarily or permanently.

If a filter in the suction line becomes clogged, the suction pressure and capacity will decrease, which is often mistaken for an evaporator problem.

Oil filters are often installed in the oil return line between the oil separator and the compressor. If this filter is blocked it can lead to excessive oil carry-over, which affects heat transfer in the evaporator.

Pressure gauges, permanently installed to monitor compressor suction and discharge pressures, are convenient when maintaining the system. Because of the pulsating nature of the refrigerant gas flows within a reciprocating compressor system, it is advisable to connect gauges to the system using throttle valves. These valves not only provide a shut-off when gauge readings are not required, but also provide a means for throttling the lines to prevent gauge fluctuation when readings are to be taken.
Compressor shut-off valves or service valves are safety devices to protect the system from excessively low or high compressor pressures, i.e. low/high evaporation temperatures. A compressor shut-off valve is shown in Figure 2.16. If the pressure drops below a pre-set level, the compressor is stopped. The valve can also be used to start the compressor when the pressure reaches a pre-set level. The valve also acts as a safety device that protects the system from excessively high pressures by controlling the compressor. It measures the pressure at the compressor outlet, and the compressor is stopped if this pressure becomes too high. This component is apparently ideal for freeze protection by preventing low evaporation temperatures. However, for practical reasons the low-pressure control must often be by-passed during start-up and will therefore not protect against freezing. Unfortunately, the start-up is the situation with the highest risk of freezing (cf. chapter 8.4).

A sight glass, see Figure 2.17, should be positioned in the liquid line in every system (cf. Figure 2.12). It is generally located immediately before the expansion valve, and provides a means for viewing the liquid flow.

If a gas/liquid mixture is detected in the sight glass, this indicates that the sub-cooling is insufficient. This will disturb the operation of the expansion valve and may result in severe superheating or system hunting. The presence of gas in the liquid may be due to the following:

In a system without a liquid receiver, (1) can be solved by charging more refrigerant. When doing so, the extra refrigerant will collect as liquid in the condenser. The liquid level will then rise in the condenser and the sub-cooling will thereby increase. Note that in a system containing a liquid receiver, the sub-cooling cannot be increased by charging more refrigerant. Problem (2) is solved by changing the filter or modifying the system in other ways to reduce the pressure drop. Problem (3) can be solved by insulating the liquid line or increasing the sub-cooling. If this is not possible, the condensing pressure may have to be increased at the expense of a higher energy cost.

The sight glass also includes a humidity indicator. A color scale shows the degree of humidity in the refrigerant and hence warns when it is time to change the filter drier.

Solenoid valves can be direct or pilot operated. The direct type is usually only manufactured in small sizes. Pilot operated valves require a certain pressure drop to open. In this case, there is always a risk that flash gas will disturb the operation of the expansion device in systems with limited sub-cooling.

Suction line accumulators are installed to avoid liquid carry-over to the compressor, which could affect lubrication and, in the worst-case scenario, lead to damage if liquid or oil foam enters the compression chamber. This may cause the expansion device to malfunction. It is also a problem during start-up and after defrost, when large amounts of liquid refrigerant can be flushed back to the compressor. 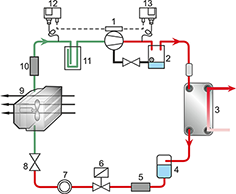 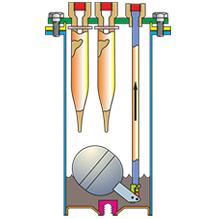 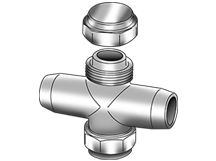