In addition to being toxic or explosive and thereby dangerous to people's health, there are other problems associated with refrigerants. Environmental aspects are increasingly being taken into consideration. Refrigerants can thus also be ranked according to their impact on the stratospheric ozone layer (the Ozone Depletion Potential, ODP) or as greenhouse gases (the Global Warming Potential, GWP).

Refrigerants containing chlorine or bromine contribute to the breakdown of the ozone layer (see Figure 5.1). The reaction is as follows:

However, the CIO molecule is unstable. It breaks down and reacts with ozone molecules (in accordance with the equation above) repeatedly until a more stable compound is created.

The ODP is the ratio of the impact on ozone of a chemical compared with the impact of a similar mass of CFC-11 (R11). Thus, the ODP of CFC-11 is 1.0 by definition. Other CFCs and HCFCs have ODPs ranging from 0.01 to 1.0. The halons have ODPs ranging up to 10. Carbon tetrachloride has an ODP of 1.2, and methyl chloroform's ODP is 0.11. HFCs have zero ODP because they do not contain chlorine.

Due to their stability in the atmosphere, CFCs as well as HCFCs and HFCs are often very effective greenhouse gases. The GWP factor is used to reflect their impact on global warming.

When using GWP values from different sources, it is important to consider that the values may differ due to different integration times or calculation models.

Another measurement of the impact on global warming is the TEWI value (Total Environmental Warming Impact). This includes not only the direct impact of any release of the refrigerant (GWP), but also the impact during the generation and use of primary energy in the system. 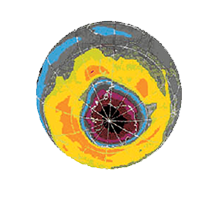 Figure 5.1 The image recorded by the American satellite Nimbus-7 on 3 October 1990 already shows a severe reduction in the ozone layer over the South Pole.