In the condenser, the saturated refrigerant liquid is sub-cooled to a temperature below the bubble point to ensure pure liquid enters the expansion valve. If additional sub-cooling is desired, to increase the available evaporating energy, this is best carried out in a dedicated sub-cooler situated after the condenser. Three alternatives for dedicated sub-coolers are discussed below.

Another solution is to let part of the refrigerant flow evaporate and cool the remaining condensate liquid. The evaporated refrigerant then enters the compressor at an intermediate pressure level. This intermediate gas flow can also be used to provide extra cooling for the compressor, but condensate sub-cooling is the main application. The economizer system design requires extra components, piping and a compressor with an "economizer" entrance. The increased capital expense makes this system solution viable only for large refrigeration systems. Figure 7.14 shows a system with an economizer.

A third method is to sub-cool the refrigerant liquid by utilizing the superheating of the gas leaving the evaporator. In a liquid suction heat exchanger, the cold gas that leaves the evaporator is used to reduce the temperature of the warm condensate liquid before the expansion valve, as shown in Figure 7.15. Because the refrigerant mass flow is the same on both sides of the BPHE, the decrease in enthalpy of the condensate exactly corresponds to the enthalpy increase of the gas. If the level of gas superheating is too high, this may cause problems with elevated discharge gas temperatures, which may limit the level of sub-cooling.

However, there are advantages in "lifting out" the superheating from the evaporator to a liquid suction heat exchanger. The increased temperature of the gas limits, or even eliminates, the negative influence of heat exchange between the refrigerant and the surroundings. The problem of water condensing on the suction pipes is also largely reduced. A similarly high level of superheating inside the main evaporator would require a much larger surface area than in the case of a liquid suction heat exchanger, due to the smaller temperature difference.

Figure 7.13. The right picture shows a subcooler system with combined water circuit, The left picture shows the system drawn in a log P/h diagram. The increased subcooling from (b) to (c) reduces the flash gas after the expansion valve and increases the available cooling capacity inside the evaporator.

Figure 7.14 Economizer system with a log P/h diagram. The refrigerant flow is divided after point (b). The smaller flow (m1) is evaporated at an intermediate pressure to cool the main flow (m2). The cold intermediate gas (f) enters the compressor in a special economizer port where it also provides additional cooling for the electric motor. 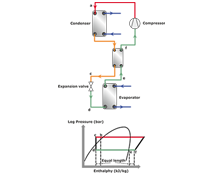