The brazed heat exchanger was launched as an evaporator for refrigerants by SWEP in the early 80's. However, a problem arose as the demand for higher capacities and larger plate packs increased. The operational efficiency and stability as an evaporator decreased for BPHEs that had the large number of parallel channels necessary to cope with high refrigerant flows.

The problem of maldistribution was quickly shown to be caused by the dynamic pressure differences between the inlet and outlet ports. The evaporator's inlet conditions differ from its outlet conditions, because the inlet flow is a mixture of liquid, vapor and lubricant oil, while the outlet flow is dominated by vapor. Thus, the profile of the dynamic pressure gradient differs between the refrigerant inlet and outlet. It will therefore be easier for the gaseous refrigerant to enter the earlier channels than the later ones. The result is an uneven evaporation profile with lower heat transfer, decreased stability of operation and lower utilization of the heat transfer surface (see Figure 6.16).

Approximately 95% of the total heat of absorption inside the evaporator comes from the latent energy of boiling the liquid refrigerant. In the channels where a surplus of liquid refrigerant is injected, the temperature will be greatly reduced, which may result in problems with freezing (see Figure 6.​17a). The heat transfer area of the heat exchanger is not utilized optimally.

SWEP has developed a reliable distribution systems. A distribution device, as shown in Figure 6.18, is placed at the inlet of each channel, forming a smooth, consistent tube for the refrigerant mixture. Two different technologies are used, distribution rings and Q-pipe. Each device has a carefully defined radial drilled hole, through which the refrigerant flow is forced. The pressure drop induced by forcing the flow through the holes neutralizes the effects of the changing dynamic pressure in the top of the unit. The position of each drilled hole at the entrance to each refrigerant channel ensures even distribution. The design of the distribution device is optimized for each model, and production control is very advanced in order to ensure correct assembly and maintain the tolerance for the distribution hole. The result is the SWEP ranges (e.g. V, P, F and Q ranges) of dedicated evaporators, optimized for specific refrigerants and applications. They ensure stable and highly efficient heat transfer for large plate packs and high refrigerant flows.

Influence of the inlet connection

The SWEP distribution device is most effective when there is a homogeneous mixture of liquid and vapor at the entrance to the BPHE. Directly after the expansion valve, vapor and liquid are completely mixed. They stay in this homogeneous state provided the flow velocity is high enough to create the necessary turbulence. If the velocity is low, i.e. the pipe dimension is too large, phase separation will occur. The refrigerant flow into the evaporator separates into a fast vapor stream and a slow liquid stream, giving less predictable performance. If the pipe diameter is instead very small, the high velocity will induce a high pressure-drop, resulting in energy losses and a reduced COP.

The recommended refrigerant velocity inside the expansion pipe (F3) to maintain a homogeneous mixture is 10-25 m/s. The inlet connection should never be larger than the inlet port diameter of the F3 port (see Figure 6.19), because this increases the risk of phase separation. Due to the distribution device, the inlet port size (F3) is smaller in a dedicated evaporator than in a B-model.

The refrigerant vapor leaving the evaporator should have a velocity high enough to force out the small volume of compressor oil that circulates in the system. The oil will otherwise accumulate, adhere to the channel walls and reduce the heat transfer coefficient, resulting in lower evaporation temperature and reduced system capacity. A common recommendation is to design the outlet pipe to attain 5-10 m/s for vertical pipes and 2.5-5 m/s for horizontal pipes to ensure oil return. The higher velocity should be used for evaporation at low temperatures, where the viscosity of the oil is increased.

The outlet velocity stated in SSP is the maximum vapor velocity in the BPHE port, not corrected for a possibly smaller connection. When this port velocity exceeds 20-25 m/s, the induced pressure drop inside the port will further destabilize the dynamic pressure balance inside the evaporator, increasing the risk of boiling instability. It should be noted that selecting a larger connection than the port diameter does not result in better performance, because a high pressure-drop is induced in the transition between port and connection. Instead, the port velocity can be reduced by allowing double gas exits or selecting a BPHE with a larger port diameter.

Figure 6.22 illustrates the co-operation between the SWEP distribution device and the expansion valve. Figure 6.23 can be used to illustrate the pressure levels just outside and inside the SWEP evaporator. 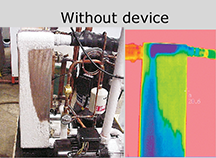 Figure 6.17a Thermo camera picture visualizing refrigerant mal distribution in a BPHE without distribution device. Photo of the same phenomena visualized by ice deposit on outside of the BPHE. 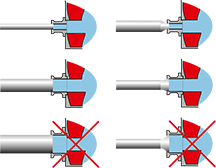 Figure 6.19 Suggestions for different inlet (F3) connections. The inlet connection can be smaller than the inlet port (top) or the same size (middle), but never larger (bottom).

Figure 6.22 The pressure drop over the fixed orifice of the SWEP distribution device, (b)-(c), varies with operating parameters such as summer and winter conditions, capacity and inlet vapor quality. The total pressure drop, (a)-(c), is almost the same for all operating conditions, however, because the expansion valve controls the outlet evaporation pressure (TSAT,OUT). Measuring the temperature after the expansion valve, point (b), will therefore not give relevant values.