There are several types of compressors, as listed in Table 3.1.

In addition to their different working principles, compressors can also be distinguished according to their basic type of construction, as shown in Table 3.2.

Table 3.2 Classification of compressors according to their size.

The reason for the general size grouping is to show the possibilities for maintaining and repairing expensive compressors, which is less important for small, mass-produced hermetic compressors.

Inside the reciprocating compressor housing, one piston moves up and down in each cylinder. When the piston is at its lowest point, superheated gas enters the compressor through the inlet valves. When the piston moves up, the inlet valve closes and the gas pressure increases, due to the reduced volume. The compressed gas leaves the compressor when the pressure is high enough to open the exit valve. The downward piston action initiates a new intake of gas through the valves.

The advantage of reciprocating compressors is the relatively simple working principle and construction. The main component, a circular cylinder with a suitable piston, can be manufactured quite easily with good accuracy. A disadvantage of reciprocating compressors is that they have many moving parts, which makes it almost impossible to avoid vibrations. Another disadvantage is the "dead space". When the piston is at its top position, some of the compressed gas will be trapped in the space between the top of the piston and the cylinder roof. The gas in the dead space results in lower volumetric efficiency, because less fresh gas is compressed on each piston stroke than the total volume of the cylinder could actually admit.

The valves controlling the flow of gas to and from the compressor are sensitive to droplets in the gas. If a considerable amount of liquid enters the compressor housing, a very high pressure can be built up when the piston reaches its top position, which may cause severe damage to the valves or crankshaft. This phenomenon is called liquid hammer.

Thanks to the improvements in screw compressors in recent years, they have become more common in air-conditioning and mid-range refrigerant applications. They will probably become even more popular, and replace many large (from 50 kW) reciprocating compressors. Screw compressors are produced in two different configurations: the twin-screw compressor, also called the Lysholm type after its inventor, and the singlescrew compressor (see Figure 3.3).

The twin-screw, the most common type, is composed of two rotors with complementary profiles referred to as screw and slide rotors, or male and female rotors. The rotor profiles are designed to decrease the volume between them continuously from the inlet to the outlet of the compressor. Unlike reciprocating compressors, screw compressors have no dead space. The refrigerant is fed from the low-pressure to the highpressure side with a continuously decreasing volume, i.e. continuously increasing pressure. Screw compressors therefore have neither suction valves nor pressure valves, only a non-return valve to ensure that there is no return flow of refrigerant when the compressor is stopped.

Screw compressors can work at a high compression ratio because the oil, in addition to its lubrication and sealing functions, also absorbs compression and friction heat during the process. Proper oil cooling is therefore essential in a screw compressor, and can be provided either by the injection of refrigerant into the compressor or by a separate oil cooling system. BPHEs are widely used as oil coolers.

The advantages of scroll compressors have been known since the early years of the 20th century. The reason for their not being introduced on a large scale until the 80's was the difficulty of producing scrolls, which requires very high precision.

Scroll compressors capture the gas in the volume formed between one fixed and one orbiting scroll. The orbiting scroll is driven by an electric motor, which rotates a shaft. Note that the scrolls perform an orbiting motion. They do not rotate.

Figure 3.4 explains the scroll compressor function. Superheated gas (blue) enters at the outer ends of the spirals and is compressed on its way through the scrolls due to the orbiting motion of one of the spirals. The discharge hole, where high-pressure gas (red) leaves, is located in the center of the scrolls.

Scroll compressors are available in both open and hermetic design. They have several advantages over reciprocating compressors: 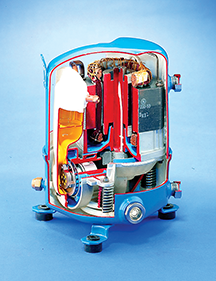 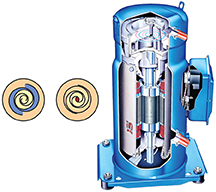