High temperature in the evaporator is eq​​uivalent to high pressure and high vapor density. This means that 1 kg high-pressure vapor occupies less volume than 1 kg low-pressure vapor. In a refrigerant system, the mass flow of high-pressure vapor into the compressor is therefore larger at each displacement than the mass flow of low-pressure vapor. To maintain a specific suction pressure, i.e. to maintain a specific evaporating temperature, the evaporator must be designed to vaporize the same mass of refrigerant as is compressed in the compressor.

The values in Table 3.3 have been calculated in design software for compressors.​​​​​​​​ 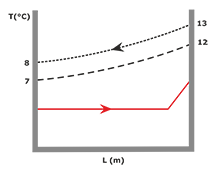