An affordable and sustainable supply of energy is the key to modern society as well as global economy.

However, with primary energy production all around us, there has been little focus on using the heat by-products as secondary energy sources. The most cost-effective yet unexploited resource is waste heat.

Many industrial processes are highly energy intensive and release a vast amount of exhaust gases and waste streams. Due to process inefficiencies and the inability of existing technologies to recover the waste heat, a vast deal of the energy used in modern industries is lost, either directly to the atmosphere or to cooling systems. Since the efficiency of generating energy from waste heat depends on the temperature of the waste heat source, it has to date not been practical or economical to recover waste heat to any larger extent. Current technology has limited the process to heat sources of medium- to high temperatures (above 500°F/260°C), when most of the waste has temperatures below 300°F/150°C. However, new technologies are emerging which allow for lower temperatures.

One of these emerging technologies, the Organic Rankine Cycle (ORC), lowers the demand on the temperatures, making it economically feasible to recover waste heat and turn it into electricity. The working principle of the ORC is the same as that of the well- established Rankine Cycle describing steam turbine operation in power plants. Confined to a closed circuit, the working fluid is first pumped to a boiler where it is evaporated. When passing through a turbine the organic vapour fluid expands and is finally re-condensed, normally using a closed water loop in the shell-and-tube heat exchanger. The thermodynamic cycle is finished when the condensate is pumped back to the evaporator. Evaporation occurs at high temperature/high pressure side and condensing at low temperature/low pressure side, which is the opposite from the normal refrigeration cycle.

The variety of available working fluids (hydrocarbons or refrigerants) and energy converters, ranging from axial turbines to piston or Wankel expanders, opens up for designing systems with good performance for wide temperature ranges. This also challenges producers of heat exchangers, who need to cover complex combinations of flow capacities, pressures and temperatures in systems extremely sensitive to pressure drop. Historically, this has called for costly and bulky tailor-made solutions. Today, most cases can be solved with mass produced modular brazed plate heat exchangers. These technical advantages allow for simple start/stop procedures, automatic operations, minimum maintenance, good performance at partial loads and very reliable and quiet operation. 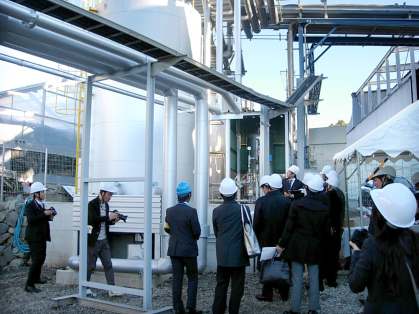 The development of heat exchanger components for ORC systems have accelerated in the past few years. It is particularly obvious in Japan, with its advanced technology and need for energy for its industries, in combination with the demand of decreased dependency on nuclear power. When the Japanese-based company Daiichi Jitsugy got a request from Ertec to install an ORC system in their new waste incineration plant, the company’s engineers knew that they would need a heat exchanger out of the ordinary. SWEP was their natural choice. Daiichi and Ertec has known SWEP since late 2011, but for years SWEP has been working with the American-based company Access Energy, which has manufactured the core part of the plant’s ORC system. “Our collaboration started on April, 2012. That was our first ORC demonstration plant”, says Osamu Ito, the engineer in charge of the project at Daiichi. “The first test unit at Ertec was with our B500s”, says Seiichiro Misaki, Sales Manager for SWEP Japan. The private incineration facility in the Yamanashi Prefecture is now generating clean power from the hot flue gas produced by the incineration process. The ORC system is used to remove the heat from the flue gas and convert it into electric power, which can be used onsite or sold locally.

“Since the test unit ran so well, Daiichi wanted to increase the capacity, from 75 KW to 125 KW and they wanted even better performance”, says Seiichiro Misaki. SWEP was able to deliver. “We have the capability to calculate and select the right BPHEs”, says Seiichiro Misaki, “and we also have the right capacity BPHEs. In many projects, we have out-performed our competitors, where we have been able to show the closest performance to our calculation and selection.” For this particular plant, SWEP’s most powerful heat exchanger was selected, the B649. “This project is a relatively small plant, but it produces a lot of power”, says Osamu Ito. “More electricity is our constant focus”. 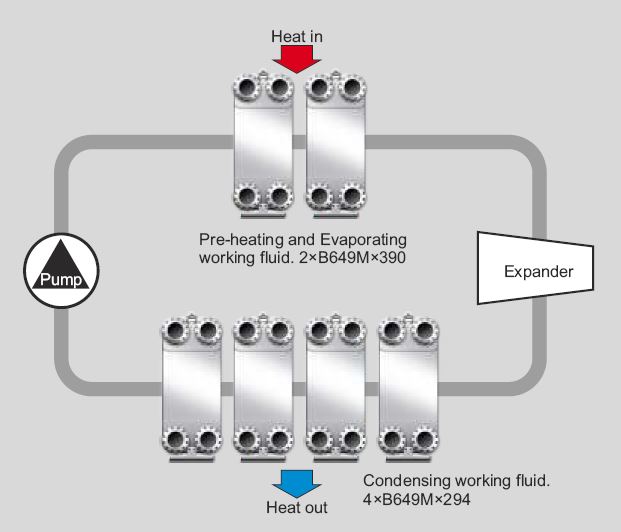 A heat exchanger with a capacity beyond the ordinary

Delivering at least twice the capacity, the B649 is the most powerful of all comparable heat exchangers on the market today. Its compact size saves space and decreases the number of pipes and couplings needed. With its core parts produced in Sweden, the B649 is made for District Heating and Cooling networks, HVAC and Industrial projects: simply everywhere where there is a need for an efficient compact BPHE with close temperature approaches at high operating pressure. The B649 offers gasket PHE-like capacities without the wear and tear of parts. Compared to other technologies which use a lot of material for support equipment, frames etc., 95% of the material in the B649 is used to transfer heat. Available in three different pressure classes, including a 25 bar high pressure class, the B649 saves money: on spare parts, space, energy consumption, transportation and installation.

Although the heat exchangers were the first commercially produced ones of the new model, SWEP was able to obtain an approval from KHK (The High Pressure Gas Safety Institute of Japan) in time for installation. “It stood well with the large plate number (294 and 390 plates)”, says Seiichiro Misaki. The result is so far a great success. At the end of November 2013, a big party was held at the Ertec plant. “We had invited a lot of our customers to the site”, says Osamu.

“Everyone was thrilled and congratulated us on a great plant. SWEP is a reliable partner and supplier.” 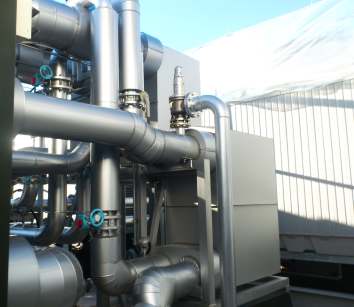 The development is ongoing

The ORC application uses a liquid waste heat source, but Daiichi is now looking into increasing the temperature and pressure and use a steam source instead. The heat source could be the same, but the prioritization of electricity production is higher and therefore the system is tapped on energy at a higher temperature. The system is fed with energy via a cascade process where steam is condensed, fully or partially, while the working fluid is evaporated. Normally the steam operating temperature is in the range 265-355°F/130-180°C, but in principle there is no upper limit. Designed to deliver maximized energy efficiency and outstanding system performance, all SWEP BPHE can be used at temperatures as low as 140-160°F/60-70°C. This brings whole new possibilities for renewable energy sources with limited temperatures, such as solar power, and SWEP will definitely be a part of the further development.